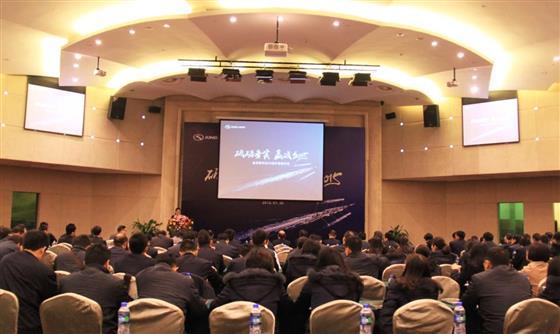 In 2014, the overseas marketing system has sold 12,293 vehicles, which amounted to 2.167 billion CNY. Till now, King Long buses have been sold to 122 countries and regions.

After that, the director Simon Xie gave a work report on overseas marketing system. Mr. Xie analyzed the situations of overseas sales in 2014, and also the macroeconomic situation as well as the competitive situation of bus & coach export sales in 2015. And he reported on the overseas marketing plan and resource demand in 2015. Mr. Xie said it would be a year of both pressure and challenges, but the whole system is confident and resolved to reach the goal.

In the end, the managers of each overseas region delivered their work reports of 2014 and business plans of 2015. In the meantime, a number of individual and team awards for the year of 2014 had been awarded within the overseas marketing system.

Eventually there is huge competition and complex economic situation, but under the pressures and challenges, King Long’s overseas system will beyond all difficulties and obstacles by confidence.